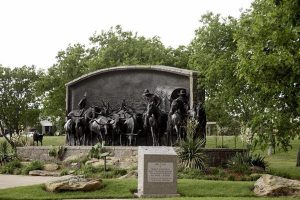 For Thomas H. McCasland Jr., (Oklahoma oilman, entrepreneur, business man, philanthropist, father of two, employer to hundreds, champion to dozen’s of worth while causes) … it wasn’t at all a question of “how to be remembered.”

Tom had already touched the lives of thousands of individuals and organizations … far too many to be easily forgotten even as the thought of retirement from the business he had grown to greatness loomed largely in the back of his still active dreams and aspirations. Quite the contrary … this President of the McCasland Foundation was searching for a means to boost the community of Duncan, Oklahoma, and honor the memory of his father, grandfather, the pioneers of Stephens County, and the builders of the State of Oklahoma … when the thought of erecting a monument to its past first came into being.

With roots deeply seated in the heritage of this great state and community, Tom knew that a tribute HAD to be made to the men (the cowboys) who molded this land so many years before … with mud in their boots and rain on their hats as they led the thundering herds of longhorn cattle across the untamed wilderness to forge the basis of commerce and community in the wild and unforgiving landscape.

Through a connection with his high school friend Bill Moore, Tom contacted Bill’s son, sculptor Paul Moore … an artist-in-residence at the University of Oklahoma … and no stranger to larger than life projects. With the fervor and enthusiasm that only a master sculptor can describe, Paul threw himself into the work. Two years, and countless hours of tedious … sometimes back breaking … work later, a massive and realistic image of the “Chisholm Trail” began to emerge in the Shidony foundry near Santa Fe, New Mexico. Using a “relief to fully-dimensional” style that has undoubtedly become his trademark … Paul Moore cast into bronze the spirit of a bygone era.

Standing nearly 15-feet high atop the immense base and stretching almost 35-feet across the horizon this majestic work of art, titled “On the Chisholm Trail” is truly a monument to the American cowboy … a legacy to the man who dared to dream … and a labor of love to the artist whose own roots allowed the insight to make it a reality. In  August 2014, Oklahoma Magazine designated it as “20 Objects that Shape Oklahoma.”