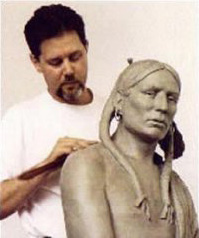 Paul Moore has vast knowledge and experience in the design and sculpting of monumental sculpture and portraiture.

In 1995, Moore’s bronze portrait of Chuck Jones, the creator of Bugs Bunny and numerous other cartoon characters, was acquired by the National Portrait Gallery, Smithsonian Institution, Washington, DC.

His career has included numerous commissions for design and sculpting life-size and larger sculptures. One of those is a monumental eight-foot seated figure of University of Oklahoma President Emeritus George Lynn Cross, installed at the Norman campus.

In 1995, Moore was commissioned to create a larger-than-life sized sculpture of Carl Albert, the 46th Speaker of the House for McAlester, Oklahoma. A second casting of the Carl Albert sculpture was placed at the University of Oklahoma in Norman.

In his portraits, Moore strives to render life-like representations which go beyond physical characteristics, and which reveal something of the spirit of the individual. Possessing a keen sense of anatomical form, he also draws upon his intuitive ability to glean the essence of his subject’s personality.

“I enjoy the process, the challenge of sculpting people and animals, especially bringing out the spark and personality of the individual subject which makes them unique. It’s also very satisfying to interact with my subjects and gratifying to see their response to the work in progress. This interaction is a valuable life experience for me.”

For seven years, Moore headed the Enlargement Department at the Shidoni Foundry, one of the largest art foundries in the United States. With more than 150 commissions, plus multiple sculpture enlargements to his credit, he continues to be Oklahoma’s premier sculptor. He continues work on the longest bronze in the state, now at 365-feet long, the Oklahoma Centennial Land Run, in Bricktown, Oklahoma City. He also is credited for the 15-foot sculpture “As Long as the Waters Flow” at the Oklahoma State Capitol. Since establishing his studio in 1993, Moore has devoted his full-time efforts to creating a substantial body of work from his own original designs.