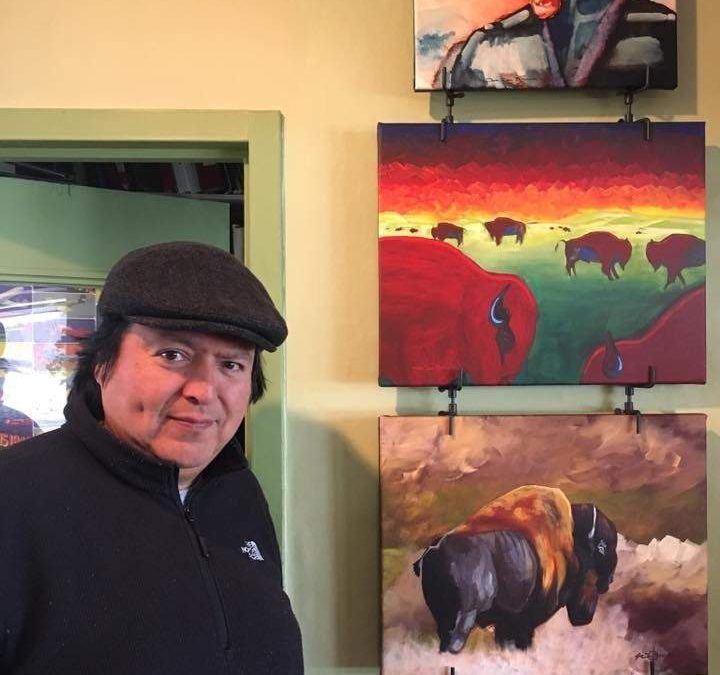 We are pleased to feature Joe Don Brave in the Garis Gallery of the American West. His exhibit will be at the Heritage Center from July 1 through September 2021.

I was born in Kansas City, Missouri in 1965 and soon after, my father (a successful artist and graphic designer and a major influence on my art,) nicknamed me Joe Don, after Oklahoma football legend Joe Don Looney.
At age 9, my parents relocated our family to Osage County, Oklahoma, home to my Osage people, where I remained until I left for college. I grew up, immersed within the traditions and customs of the Osages and for 40 years, actively participate in our annual traditional ceremonial dances.
I studied art at the Institute of American Indian Arts in Santa Fe, New Mexico, where I learned the fundamentals of art and museum studies. I began my career as a Museum Technician, at the Osage Nation Museum, in Pawhuska, Oklahoma, in the early 1980’s and continued at the National Museum of the American Indian; Smithsonian Institute in New York City, where I was an integral member of the move team, moving the collection from Harlem to the Bronx and then to Maryland.
My artwork revolves around my heritage, emotions, environment and expressions that I have picked up through my adventures along the road, and while listening to the elders tell the stories of their experiences. I am the son of the Osage, part of its history and a product of its many changes, endured over time. I am a citizen of the world, as such, seek to define my identity and place within these two worlds, which are but one.