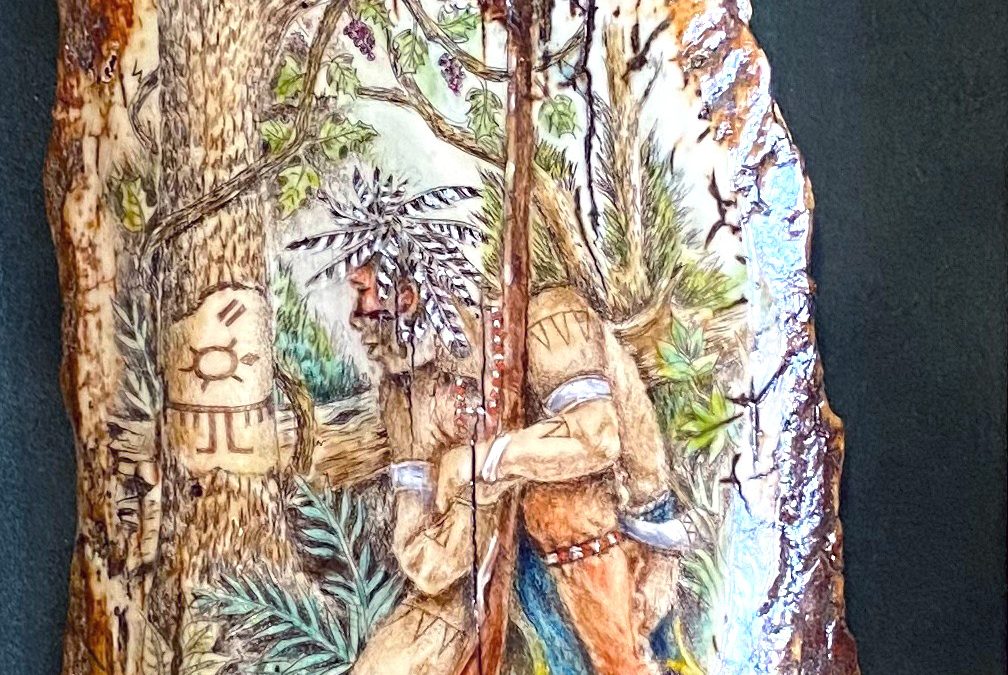 Skip will join us at the Heritage Center as a featured artist from April 1 – June 30.

Born August 1, 1943, Skip attended High School in Atoka, Oklahoma. After graduation, he obtained a degree in Commercial Art and immediately went to work for a major advertising firm in Dallas, Texas.

The big city environment soon proved disagreeable to Skip, who had grown up spending most of his time in the woods hunting or fishing. He was always competitive and striving to be at the top in any endeavor. He killed a whitetail buck deer in the 1972 hunting season that held the Oklahoma State Record for over twenty years, plus several other trophy deer earned Cy Curtis Awards.

Skip moved from Dallas back to Oklahoma, where he went to work for a saddle maker, and quickly picked up the trade tooling intricate designs in leather. He opened his own shop in McAlester, Oklahoma, named The Rodeo Shop. Back in his element, Skip began team roping, competing in Rodeos and team roping events all over the county, including the International Championship finals in 1981.

Skip is of Cherokee and Choctaw descent and has always been an ardent student of his Ancestral history and customs and all American Indian Tribes. Pulling from this research and his own diverse personal experience, you will find absolute authenticity and extraordinary detail in his work that only comes from firsthand knowledge.

He is a multi-talented artist who works in several mediums that include oils, pastels, graphics, sculpture, carvings, and scrimshaw. Skip first drew the art world’s attention and acclaim with his scrimshaw art, which is the ancient technique of etching on ivory. He has expanded his craft to bronzes cast from his one-of-a-kind moose antler carvings, decorative flint and other precious materials knives, and intricately detailed jewelry.

In 2002, Skip had the honor of being inducted into the Master Artists Hall of Fame of the Five Civilized Tribes of Oklahoma. His colorful life as a cowboy, ranch hand, artist, and after many hours of reflecting, recording, and editing, Skip has published his first collection of short stories titled “Nylon ropes, good horses, and bowlegged women.”