The Beginning of the Chisholm Trail 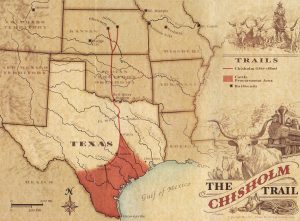 By the end of the Civil War in 1965, Union and Confederate forces had consumed most of the beef east of the Mississippi. Up until then, pork was the leading meat source in ordinary diets. Millions of people had developed a taste for beef. When available, a steer would go for as much as $50 a head back East.

During the Civil War, untended herds of longhorns multiplied by the millions. Texas ranchers became “cattle-poor.”

Thousands of cattle roamed the ranches. Ranchers considered themselves lucky if they could get $3 a head. The shortage of beef in the East, together with an increasing taste for it, created a demand that promised great profits if the cattle-poor ranchers could get their herds to the eastern cattle markets.

With the end of the Civil War, cattlemen needed a new route to get their cattle to market.
Joseph McCoy, an enterprising promoter, was the first to see promise in a shorter, more direct route through Indian Territory. This idea included new railheads slowly moving west through Kansas Territory. Working a deal with the Railroad, McCoy built cattle pens and a new hotel at the railhead in Abilene, Kansas. He hired surveyors to mark a new route back south to Texas.

They began with a route almost due south to Wichita, then followed Jesse Chisholm’s trade road 220 miles to his trading post on the north Canadian River.

From Jesse’s trading post, they headed almost due south to Texas to the closest practical Red River crossing along the way. That stop later became known as Red River Station. Considered a safer and easier route from Texas through Indian Territory, McCoy distributed handbills throughout southern Texas inviting cattlemen to bring their herds to Abilene.

Thus, the legendary Chisholm Trail was born, and the world began a love affair with the old west and the American Cowboy. That love affair continues today.