Jim Weaver – The Long Hard Ride: A Commemoration of the Chisholm Trail 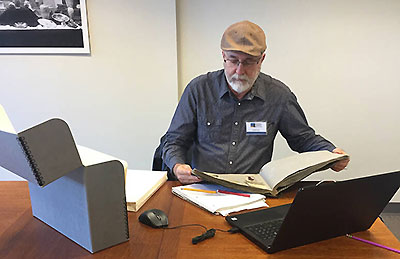 Weaver’s exhibition will feature new work, with nearly a dozen large-scale leather hides displayed in the Chisholm Trail Heritage Center’s main exhibit room. Extensive research by the artist has included visual and written references of the 1870s cattle drives, drovers’ journals and geography. Using his leather craft skills, Weaver is known for telling a story of history, and how humans are dependent upon the earth.

“Geographically, the scene will begin in San Antonio and end at the railroad stockyards in Abilene, Kansas,” Weaver said. His exhibit will include the extreme weather conditions faced along the trail, topography and more. His work has been featured in The Paseo Arts District, Oklahoma Visual Arts Coalition Gallery, the Robert S. Kerr Environmental Research Laboratory in Ada since 2016 as part of its 50th anniversary; and most recently in France, among numerous other places. The Oklahoma Visual Arts Coalition provided Weaver with a funding grant for this exhibit.

To learn more about Jim Weaver and his art, please visit his website.